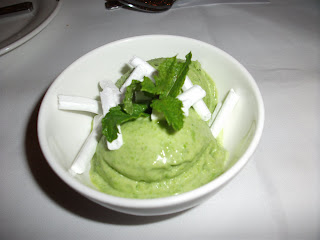 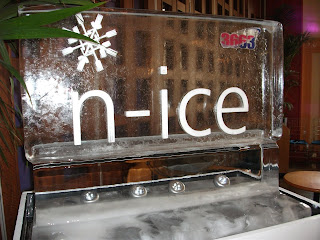 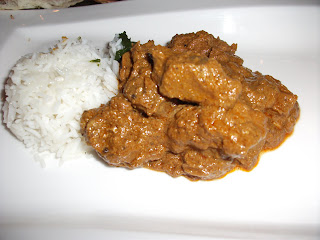 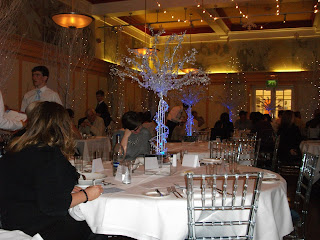 Something a little different this week. I was invited to N-Ice, the world’s first frozen food gourmet restaurant at Westminster Kingsway College http://bit.ly/oTC7yO and what a treat it was. We were greeted with an ice sculpture with tiny white forks embedded in the ice. As you enter the ‘pop up’ restaurant, it’s reminiscent of Christmas with fairy lights and snow flake symbols hanging from the ceiling. The entire menu was created using mainly frozen ingredients including herbs and spices. Three celebrity chefs – Atul Kochhar, Simon Rimmer and Galton Blackiston devised signature dishes while the rest of the menu has been created by chef lecturers from Westminster Kingsway College, while the college’s students waited at tables.

The aim of N-Ice is to change the perception of frozen food, says Brian Young, director general of the British Frozen Food Federation (BFFF), which opened N-Ice, “and get the general public to think about frozen food in a different way.” The ‘pop up’ restaurant, only open for a week, is totally sold out throughout the week with 600 covers booked. Questionnaires were handed out at the restaurant asking for opinions about frozen food and the dining experience at N-Ice.

The BFFF will collate the findings in liaison with Sheffield Hallam University and launch the survey results in a few weeks’ time. Frozen food has been supplied by 20 members of the BFFF including Brakes, 3663, Movenpick and Pidy.

The service at the restaurant is impeccable and prompt. To start with, I chose Atul Kochhar’s crisp fried spicy John Dory with grokha (cucumber and chilli jam) chutney. The fish was flaky and tender and the chutney gave a zingy flavour. For the main course, I enjoyed Atul Kochhar’s fragrant Kashmiri Lamb Curry. The chunks of lamb were tender in a thick curry sauce, but not too hot and spicy that you needed to grab a glass of water.

I couldn’t tell that the dishes had been created from frozen ingredients. They looked good, tasted fresh and flavoursome – so perhaps that’s the point! The perfect conclusion to the meal was petit pois ice cream from Gaston Blackiston with a strong pea and mint flavour, which melted in the mouth. Very refreshing after a curry.

The food was well presented in white bone china, offsetting the colours of the food. For example, the mango soufflé was served in an espresso cup.

The students demonstrated knowledge about the menu when I asked about certain ingredients as well as a friendly, fast and courteous service – better than at some restaurants I’ve visited!

The survey wanted to find out whether I would avoid eating at a pub or restaurant serving frozen food and after my experience at N-Ice, the answer would be no!

What a pity N-Ice is only open for a week. Perhaps there is scope for a permanent restaurant using mainly frozen food ingredients.