The Cotswolds eating out with a food allergy 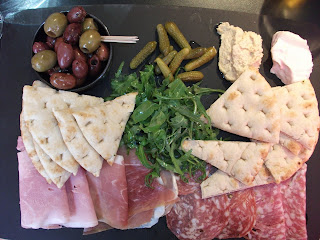 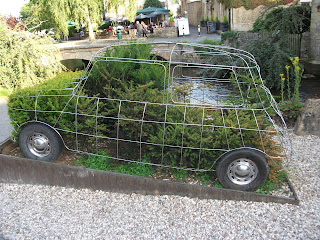 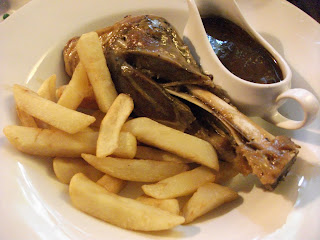 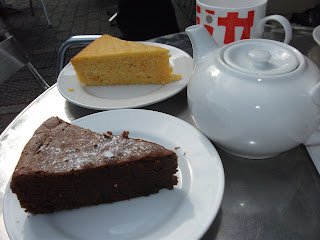 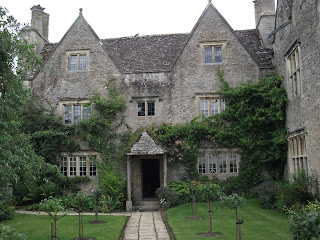 As usual, when travelling, we always take a supply of food in case we can’t find anything suitable – bottles of soya milk, as you’d be surprised how many cafes don’t serve it; Eat Natural bars; bananas and apples. I also packed some Genius gluten free bread as the owner of Holly House in Bourton on the Water where we were staying, said they didn’t have any.

Motorway services are always a hit and miss affair, so imagine our surprise when we chanced upon The Kings Hotel in Stokenchurch, off junction 5, on the M40 www.kingshoteluk.com. Here, we sat on the terrace in the sunshine where we enjoyed chips with garlic mayonnaise and vegetable spring rolls with chilli sauce, with cups of tea, using our own soya milk. We were impressed by the quick service and the ambience of the venue.

Once we’d picked up our friends Shane and Evie, we stopped off at Chipping Norton for lunch. Bravely, we walked into The Fox, Market Place, Chipping Norton OX7 5DD 01608 642658 and was greeted by the landlord. I explained I was gluten free and my husband was dairy free, so he made some suggestions from the menu – mine was a jacket potato with tuna mayonnaise (£5) while Ray opted for Gammon steak, pineapple, chips and peas with no egg (£7.50). He checked with them that no butter was used in cooking or on the vegetables. Feeling tired and footsore after exploring Chipping Norton, we felt like tea and cake, but usually go without cake as it’s generally made with wheat and dairy. We were delightfully surprised to find wheat and dairy free cakes at the independent Jaffe & Neale book shop on the main square www.jaffeandneale.co.uk What’s more, they even serve soya milk. My choice was chocolate torte caprese (delicious and chocolatey) while Ray savoured a generous slice of Nigella Clementine cake, both £2.95 each.
For dinner, we chose the scenic Old Manse hotel in Bourton on the Water www.oldmansehotel.com The restaurant was completely full, so we took our chances with the bar menu. When we ordered our food at the bar, we explained our allergies and the member of staff kept checking with the kitchen and was willing to help, despite people waiting to order drinks.

To start with Ray chose the hand-made shredded duck and hoisin spring rolls (£4.59) while I had grilled field mushrooms with goat’s cheese and rocket (£3.39). For Ray, the main course was slow cooking New Zealand lamb shank (£10.99). Instead of mashed potatoes which had butter in them, he was offered chips instead. They checked that the gravy didn’t have dairy and the petit pois didn’t have butter on the top. My main course was sweet potato apricot chickpea and red pepper kebabs (£7.59) which tasted more like vegetarian sausages. Curiously, the tea tasted metallic, so they made us a fresh pot – we wonder is it something to do with the water? Shane’s Mocha was also dubious.

We stayed at Holly House, Station Road, Bourton on the Water www.hollyhousebourton.co.uk. This is under new management and we were given a friendly welcome. I had contacted them before to inform them about our allergies and it was a delightful surprise to discover they had kindly purchased soya milk and gluten free bread. Breakfast was easy as we could pick the elements from the Full English Breakfast that we wanted. For Ray it was an egg well done, a rasher of bacon and baked beans. I had two rashers, a fried egg and grilled tomato with toasted gluten free bread. A real treat!

The next morning we explored Kelmscott Manor www.kelmscottmanor.org.uk, William Morris’ country retreat. Apparently when he saw the farmhouse in an estate agent’s, he immediately fell in love with it, describing it as “a heaven on earth”. I wouldn’t disagree with that; it is an idyllic residence beautifully presented with well informed volunteer guides, who will fill you in on every detail. There’s even Morris’ top coat on display and examples of Morris’ famous designs on fabrics. Pictures of his wife, Jane, are on display including the famous “The Blue Silk Dress” by Dante Gabriel Rossetti.

For lunch, Ray discovered that the mouth-watering pasties and quiches on display contained butter (and wheat so no good for me either) so they suggested bread, ham and pickle for him. I chose a salad bowl. With two cups of tea (using our own soya milk), this came to £7.20. We wondered what the tea would taste like, but it was fine.

For our last meal in The Cotswolds, we were looking forward to a traditional English meal, but wandering round Bourton-on-the-Water this was difficult. Evie is vegetarian, so we were looking for good veggie choices, as well as dishes which Ray and I could eat. This seemed enormously difficult as most of the menus were elaborate with sauces covering the meat and poultry. From our experience, sauces usually contain wheat, gluten and dairy.

We were getting rather desperate so at one point, we went into the Chinese restaurant. It seemed ironic to be eating Chinese in the British Cotswolds, so we persevered and Shane alerted us to the Croft restaurant, part of the Chester House hotel www.chesterhousehotel.com As it was Saturday night, they were totally full, but offered us a table outside which we took with alacrity, zipping up our fleeces and jackets so we would remain warm. Evie suggested we ordered quickly so we didn’t freeze, as the temperature was falling. The service was impeccable and friendly, our waitress even offering to find a table inside if one became available. I asked whether the home-made tomato and basil soup (£4.50) had wheat in it. She checked and it didn’t – I have to say it was delicious and helped to keep me warm. My main course was Free Range Kelmscott Gammon Steak with fried egg, pineapple and chips (£8.75). The waitress had checked with the chef that there was no dairy in the dishes Ray ordered – to start with Goats Cheese and Sweet Cured Bacon served en croute with red onion marmalade, mixed leaves and balsamic reduction (£4.95) followed by Cotswolds 28 day aged sirloin steak served with chunky chips and salad (£13.50). He was assured that the vegetables would be served with no butter on them. We were too full for dessert and anyway it was getting colder by this time. This was one of the best meals we enjoyed in The Cotswolds and we would return here.

On the Sunday, we stopped off at Oxford on the way back and mooched around the crowded streets, admiring the buildings and looking inside the colleges where possible, although most of them were closed.

Again, eating lunch was problematic finding the magic combination of veggie choices and plain type dishes. We thought Ask would be possible, so I asked them whether they put dairy in the pizza dough and unfortunately they do – although they do serve gluten free pasta, which is good to know. Shane and Evie told us about this cool pizzeria chain Fire and Stone www.fireandstone.com and we discovered one in Oxford. I couldn’t eat the pizzas because of the wheat in the pizza base and unfortunately, pizzerias in Britain don’t offer gluten free pizzas as yet (unlike pasta – thank you Carluccios and Ask for serving gluten free pasta!) but I adore salads and Fire and Stone offer a wide selection. Before we sat down, we asked the crucial question “Does your pizza dough contain dairy?” and to our relief, it didn’t! The menu is arranged under different countries, so you can choose a pizza according to the country, whether it’s Europe, Africa, Asia, Australia or The Americas or create your own. For example, under “Australia”, the pizzas are named after cities, Sydney, Canberra, Melbourne and so on.

After all that, Ray decided to order something completely different – Charcuterie board (£11.25) with parma ham, Napoli salami, garlic and fennel, smoked ham, hummus, kalamata olives, comichens (like gherkins) taramasalata and grilled pitta bread. I opted for the classic Nicoise salad, one of my favourites (£9.25).

So it was back to sunny Surrey after a restful weekend in The Cotswolds. Where to next I wonder?